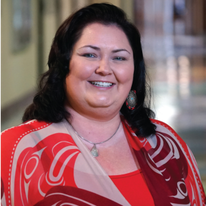 Dr. Smythe is an Assistant Professor at the University of Minnesota Duluth (UMD), she holds a joint appointment between the Departments of American Indian Studies and Earth & Environmental Sciences. She was named the 2019 Professional of the Year by the American Indian Science and Engineering Society (AISES) for her interdisciplinary research in geoscience, Native Education, and policy. In 2020 Dr. Smythe was elected to the AISES Board of Directors.

Smythe is a geoscientist and oceanographer whose research focuses on examining microbial ecology and molecular diversity, biogeochemistry, and biomineralization in metalliferous, iron and manganese rich groundwater and marine ecosystems from deep-sea hydrothermal volcanoes to hydrothermal springs in Southeast Alaska and Yellowstone National Park. In addition, she conducts research and training for geoscience faculty, researchers, and federal agencies to gain a better understanding, appreciation, and respect for diverse students, faculty, and communities, and is a signatory for the “Call to Action for an Anti-Racist Science Community from Geoscientists of Color (https://notimeforsilence.org).

In 2021 she founded the Indigenous Geoscience Community (IGC), as a sustainable community of Indigenous geoscientists who can come together to share knowledge using a relational framework, such that Traditional Knowledge and Western knowledge can be expressed within culturally specific protocols without disciplinary boundaries. The purpose of the IGC is to address the urgent need for an international community of geoscience scholars and cultural practitioners that increases representation and leadership of Indigenous peoples in the geosciences, to provide a space for cross-cultural knowledge exchange, and support and mentorship for Indigenous geoscientists in a culturally respectful and ethical manner.

Over the last 13 years, Dr. Smythe has had the honor of partnering with her tribal community after founding The Geoscience Education Program working to couple STEM disciplines with Traditional Knowledge in K-12 education by incorporating language and cultural values. She serves on the board of directors for the Xáadas Kil Kuyaas Foundation a 501 (C)3 whose mission is to promote, preserve, and perpetuate the highly endangered Northern Haida language. Through her work, she seeks to increase the number of Native American - Alaska Native students represented in STEM disciplines thereby increasing diversity and innovation, and to teach the next generation of Native leaders to embrace their Native identity.