This annual lecture, named in honor of the late Royal D. Alworth, Jr.'s life and interests, is designed to raise public understanding of a significant international topic. 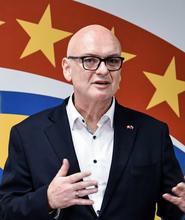 Walter Denz, M. SC., co-founder and manager of SIA Liden & Denz: Intercultural Institute of Languages, Riga, and former Chairman of the Board of the Deutsche Schule Petersburg at the Consulate General of the Federal Republic of Germany, Saint Petersburg, discussed Waking Up with War: Moral and Business Choices after February 24 in Russia.

Denz took the audience on a journey, starting in 1992 in post-communist Russia and ending last fall with hundreds of thousands of young Russians fleeing the country to avoid the draft. Denz offered the perspective of an expat entrepreneur who arrived in Russia thirty years ago to professionalize the teaching of Russian to international students, diplomats and executives in St. Petersburg, Moscow and Siberia. Russia was to become a valuable brand and despite numerous problems along the way, all the efforts paid off both financially and emotionally.

The war changed everything. Russia, as a brand, became toxic. But was it possible to salvage the teaching of Russian? If yes, where? What about the staff, the teachers and last but not least the students who - with the closing of airspace - got stuck inside the country? How do you communicate when you are located on the wrong side of the barricades? How do you communicate when your social media tools (like Facebook) become illegal? How do you behave at social and business gatherings in Russia today without constantly lying to others and to yourself? Denz sought to shed light on some important but unprecedented moral and business choices, which are unavoidable in today’s Russia.

Walter Denz is an experienced entrepreneur with a demonstrated history of working in the education management industry. He is the co-founder and manager of SIA Liden & Denz, Language Institute with centers in St. Petersburg, (from 1992), Moscow (from 2004), Riga (from 2013), and Irkutsk. In 2022, he oversaw the move of the Institute’s headquarters from Russia to Latvia. He has served as Vice President and trustee of Eaquals, a charity in the United Kingdom that fosters excellence in language education across the globe.  He was also President of the International Association of Language Centres IALC for four years beginning in 2008. He founded the tour operator Swiss House of Travel in St. Petersburg in 2000.

Denz holds degrees from the University St. Gallen in Switzerland and the London School of Economics and Political Science where he received his Master of Science degree (M. SC.). He is a native German speaker with proficiency in English, Russian and French. He has published essays on doing business in Russia in Neue Zürcher Zeitung, a Swiss, German-language daily newspaper, and in the St. Peterburgische Zeitung, a German language newspaper. He is co-author, with Karl Eckstein of the book, Business mit Russland. Ein Ratgeber für Einsteiger (Business with Russia: A Guide for Beginners) (2001, 2005). He is currently working on a Master's thesis for the University of Zurich about the period of Yeltsin‘s presidency and the "Roaring Nineties“ of Russia.