Welcome to the fourth volume of The Dialogue, the annual newsletter of the UMD Philosophy Program! In this volume of The Dialogue, we introduce our new Cognitive Science Major, not one but TWO new faculty, pass along some fun facts about what UMD Philosophy folks have been up to, hear about some awesome things our students have done, and conclude with a couple of fun philosophical jokes and a puzzle.

We are delighted to welcome two new faculty members this fall! Say hello when you see them, and check out their courses and research!

Here is what Dr. Laura Engel has to say: “As a Minnesota native, I’m thrilled to be joining the UMD philosophy department! My philosophical interests include the nature of value (questions like: What does it mean to value something? Do we create values? Can we be wrong about what we find valuable? How do we know whether the statement “X has a reason to Y” is true?), structural injustice (Can people be wronged without a particular person or policy being responsible? What are our responsibilities in these cases?), and global ethics, to name a few. I look forward to exploring these questions with you all!

Outside of the classroom, I spend a lot of time baking, practicing aerial dance (aerial silks are my apparatus of choice), playing board games, hiking, and spending

time with my fiancé and our two cats. In fact, I do some of my best philosophical thinking during these activities. I’ve always loved the fall, so I’m particularly looking forward to experiencing the fall colors along the North Shore.”

Fun Facts! Did You Know That... 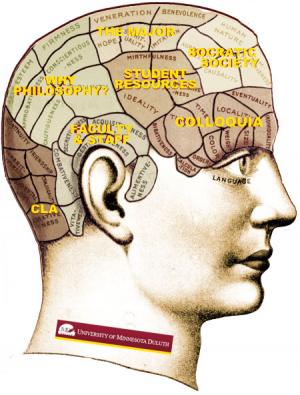 Aleksander Holleran successfully defended his Honors Thesis, “Are We Patient-Centered Yet? A phenomenological assessment of the patient- centered medicine movement”, graduating with departmental honors! 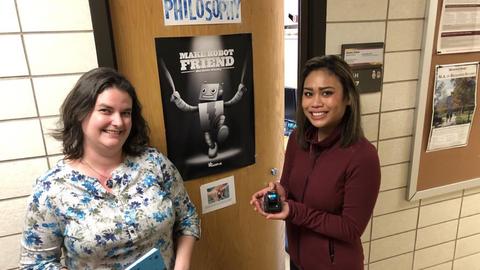 Philosophy major (and double major in Computer Science) Angelica Fleury has had a busy year!

Angelica presented her research on Buddhist AI ethics at the UROP showcase this spring before taking her work on the road, giving a talk at IACAP, the International Association of Computing and Philosophy’s annual conference in Mexico City! From there, she traveled to Pennsylvania to participate in the Rock Ethics Institute’s PIKSI (Philosophy in an Inclusive Key Summer Institute) program!

We asked her about her experiences. She says, “I learned (and am currently learning) how to do Philosophy outside of a classroom setting which has been immensely valuable. Attending conferences and programs such as IACAP and PIKSI has been eye-opening because I had gotten to participate in and learn about various current topics of interests in different sub-fields of Philosophy that may not have been covered in the curriculum.”

We also asked her for advice for other students about pursuing extracurricular philosophy: “My advice would be to consider being open to exploring different philosophical interests. Even if you have a main area of focus you’re interested in, you may be surprised in how other schools of thought are interconnected. Also if possible, I would urge other students to seek out faculty mentors whose interests and works align with yours since often times, they have been in your shoes and have valuable information and advice for your academic journey. Lastly if you’re able, to be proactive and making the time for applying to programs and extra-curricular activities that you would want to be involved in.”

About her double major, she says, “Adding Philosophy as a second major to Computer Science has been helpful in giving me insight on how the two overlap— specifically in areas such as Ethics, Epistemology and Logic. In addition, Philosophy in particular has been beneficial in teaching me how to think abstractly and critically through dissecting and constructing arguments, which is a bit different from what I learn in my CS coursework, but has only been complementary.”

This spring’s Commencement for the CLA and SCSE ceremony featured graduating Philosophy major Elijah Farley! Elijah represented both colleges, with dual majors in Philosophy and Chemistry. A former president of the Chemistry and Biochemistry Club and an active member of the Queer and Allied Student Union (QASU), he won the 2018 Best Initiative award from QASU for his presentation on “Queer People in Science”.

and understood about philosophy. The more you learn, the more you realize the foundations that your knowledge is built on can be broken down themselves.”

Asked for advice for other philosophy students, he says, “My advice is to take a step back and just let yourself be. You don't have to prove that you're the smartest, or that you know more about a subject than someone else, because the point of discussions are to gain knowledge as much as they are to share knowledge.”

About his double major, he says, “I’m glad I did a double major, because I don't think I would have had as much fun in my other classes without being able to apply different areas of knowledge to each other. For example, science is like anything else, you can apply different optics to something as rigid as chemistry.”

One Joke, A Philosophical Puzzles & One More Philosophy Joke

A logician wants to take a cab to the university to attend a logic talk. But she wants to be sure she goes with the most logical choice of cab company. There are two in town: the Blue taxi company, and the Green one. So she takes a look at their safety records.

It’s widely known that these two are the only cab companies in the city: The Green one has 17 cabs in service, the Blue one just 3. A cab has recently been involved in a hit-and-run accident, and an eyewitness has identified the vehicle in question as belonging to the Blue cab company. The logician knows eyewitnesses are, on average, accurate 80% of the time, and misreport 20% of the time.

What are the odds that the cab involved in the accident was actually Blue, as reported?

HINT: This is a form of logic puzzle that often trips people up, in real life as well as in thought experiments, because we tend to forget about earlier evidence when estimating probabilities and just focus on the last piece of data. So the answer is NOT 80%.

...If you’re still stuck, try working out the odds that a witness IDs a taxi as Blue even if there are NO Blue cabs on the road!

In the middle of the night, Holmes nudges Watson awake, and says, "Watson, look up and tell me what you see."
"I see millions of stars, my dear Holmes."
"And what do you infer from these stars?"