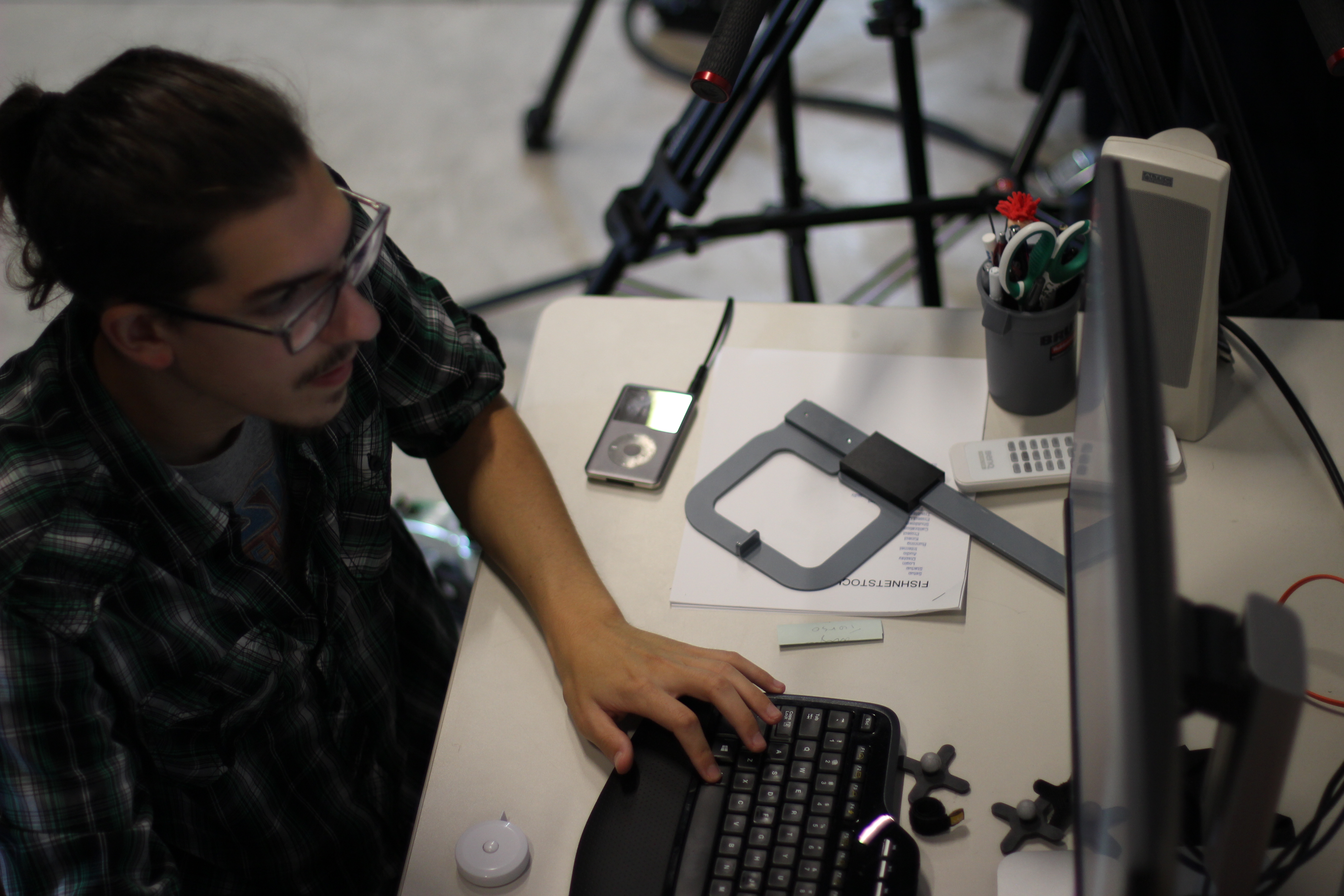 The Labs offer services for multi-disciplinary research where faculty, graduate and undergraduate researchers benefit from the Labs and their technologies to further their research. Current research projects focus on interactive installations and visualization of scientific research, particularly climate change.

The MMAD and Viz lab held three Interdisciplinary Residencies from 2017-2019.

These creative residencies allowed researchers to create or devote time to a research project using the Viz Lab or Motion + Media Across Disciplines (MMAD) Lab facilities. The Labs create an empathetic atmosphere, allowing residents to pursue their vision through exploration, reflection, research, collaboration and creative endeavors.

Scientists and engineers explored aspects of art and science within fields such as music composition, literature, dance, mechanical engineering, visual art, theatre, games, film. By the same token, artists were curious about the influence of biology, chemistry, philosophy, physics, math, storytelling, environmental science on the arts.

Below are examples of the Interdisciplinary Residency:

On-Demand Wellness + Cheer: A Meditative Journey through the Woods with Hartley

Paula Gudmundson, Associate Professor of Flute, participated in the Minnesota Council of Nonprofits Conference December 2020. Ten years ago, flutist Paula Gudmundson and visual artist Laura Andrews started seeded the idea for the project now called Hartley. The name refers to Hartley Nature Center in Duluth, where the video footage for this video and sound piece was shot. Paula was working on musical improvisations, Laura was experimenting with digital video. Over time they began discussing ways to bring their ideas together. Musical ideas about manipulating, reacting to and layering sound, and visual ideas about movement through particular spaces and places. Hartley is the result of this collaboration and it is intended to affect the viewer both emotionally and spatially, appealing to the senses with an aim toward connection and transcendence. Credits: Laura Andrews (video); Paula Gudmundson (flute); Mark Ilaug (Sitar). Created at UMD MMAD/Viz Lab Interdisciplinary Residency.

Digital Cove is a series of video games created by UMD student Charles McGregor that combined art, music, and science. Digital cove was showcased in the Tweed Museum of Art in May, 2018. McGregor worked with the Viz and MMAD labs, as well as with the SIVE lab, the Department of Art and Design, and the Swenson College of Science & Engineering. One of his games, "HyperDot" is now available on the Xbox store.

Manoomin is a permanent exhibit at Duluth's Children Museum that allows children to discover the Ojibwe language. Along with a free interactive app called Mikan,  children can learn about the wild-rice harvest from an interactive video spoken in English and Ojibwe in the exhibit. Professor Joellyn Rock from Art and Design along with grad student Logan Sales from computer science worked together in the MMAD Lab to create this interactive exhibit.

This installation plays the keys of a piano based on the movements and shapes of the clouds. A camera pointed at the sky captures video of the clouds. Custom software uses the video of the clouds in real-time to articulate a robotic device that presses the corresponding keys on the piano. The system is set in motion to function as if the clouds are pressing the keys on the piano as they move across the sky and change shape. The resulting sound is generated from the unique key patterns created by ethereal forms that build, sweep, fluctuate and dissipate in the sky.

This installation consists of a series of 42 x/y tilting mechanical devices connected to thin dried plant stalks installed in a gallery and a dried plant stalk connected to an accelerometer installed outdoors. When the wind blows it causes the stalk outside to sway. The accelerometer detects this movement transmitting the motion to the grouping of devices in the gallery. Therefore the stalks in the gallery space move in real-time and in unison based on the movement of the wind outside. This exhibit is supported by the Viz Lab.

Part of a group exhibition at the New Media Gallery, Vancouver, June - September 2019.

The dance conference attendees experienced motion capture technology and were able to see their dancing avatars take shape - and explored Virtual Reality as applied to dance. Lisa Fitzpatrick and Rebecca Katz-Harwood team-taught the workshop to an enthusiastic group of twenty dancers.

Arts Express Workshops for Cancer Survivors evolved out of the creative work of Minnesota artist and writer, Lisa McKhann, and her non-profit, Project Lulu. Over the years, Project Lulu has offered a range of playful creative  workshops, supporting cancer survivors as they express their experiences through reflective writing, creative movement, and visual art-making. Project Lulu workshops may also include the option of working in digital media, giving participants the tools to combine their own writing, visual art, and creative movement into a work of experimental video. Workshop participants don’t need any prior experience with digital media or video editing, as experienced teachers and helpers are on hand to assist. The video workshops are offered by Joellyn Rock, Associate Professor of Digital Art, with assistance from Students in Digital Methods in Art Education class, and staff in the MMAD lab in 2017.

Expressing the transformation that occurs when moving from one realm to another, fiber artists explore universal and cultural passages, including immigration, relocation, changes in form or appearance, and death, explored through varied and unexpected materials and methods.

Exhibited July 2017 at MOSTEIRO SÃO BENTO DA VITÓRIA in Porto Portugal as part of the Electronic Literature Festival, SALT IMMORTAL SEA is an interactive game/narrative and installation by Mark Marino, John Murray, and Joellyn Rock. Text and story concept by Mark Marino. Interactive design and programming by John Murray. Digital art and visual assets by Joellyn Rock, with digital prints on fabric made possible through the Viz/Lab at University of Minnesota Duluth.

Uses four infrared sensors to detect people as they move in front of it. The sensors are programmed to move a drawing arm in real time creating a charcoal drawing based on a participants' movements.

Bowen's work infrared drawing device will be included in Drawn from a Score a group exhibition at the Beall Center For Art + Technology, University of California, Irvine, October 7 - February 3. Drawn from a Score will include works by: Sol LeWitt, John Cage and Rafael Lozano-Hemmer.

"Black Gold" interprets the important history and threatened existence of sturgeon through the work of multiple artists.  These iconic freshwater fish have been on Earth for more than 100 million years, but have become endangered due to over-harvesting and diminishing natural habitat.

The Effect of Different Instruments and Expertise on Pianists’ Hand Mechanics, 2017

Playing the piano requires remarkable coordination and motor control, skill acquired over literally decades of practice.  Over the course of a lifetime, a pianist trains and performs on a wide variety of instruments requiring him/her to adapt to the nuances of each instrument, particularly with regard to resistance and the force necessary to skillfully depress the piano keys.  Due in large part to the relative portability and low cost of the instruments, beginning piano students often practice on some type of electronic keyboard, the keys of which may or may not be touch sensitive and/or weighted/semi-weighted. More...

This group was formed by faculty and students from collegiate units across the campus to work together and create digital tools that enhance language acquisition and cultural learning.

Have you ever noticed that when you are using a mouse and you go to click on something that you have to slow down in order to hit the icon or else you will overshoot it?  How about when you get ready to start your car and you have to slow down in order to insert your key into the ignition accurately?  There are countless examples of this phenomenon known as the speed-accuracy trade-off.  Speed-accuracy trade-off or SAT, describes the inverse relationship speed and accuracy have with one another when it comes to human movement.  In essence, the faster the movement you make is, the lower your accuracy is going to be.

Our fundamental research question is: do movement and muscle activation patterns differ between novice and expert stand up paddleboarders? We would hypothesize the more experienced paddleboarders are more likely to use the stronger, proximal muscles to propel them forward and to have greater changes in joint angle for the proximal (torso and shoulder) as opposed to the distal (elbow and wrist) joints. We also hypothesize that overall muscle activation, particularly co-contraction, is decreased in experienced subjects as compared to novice subjects. The results will help us understand whether training is required in order to minimize the chances of injury during paddleboarding, as well as determine what injuries are likely even in experienced paddleboarders. More...

FISHNETSTOCKINGS is an interactive installation created by digital artist Joellyn Rock, computer scientist Pete Willemsen, visual artist Alison Aune, and a crew of collaborators. The participatory space allows the audience to dive in and make virtual waves inside this alt version of a very old tale. A layered mix of digital video, text, silhouettes and cutout elements are motion activated with a combo of code, Processing and Kinect. More..

This exhibition features the art of Eun-Kyung Suh who honors and memorializes the extreme diasporic experiences of Korean “Comfort Women” during World War II. Using silk organza, Suh creates boxes printed with photographic images of the victims and their journal entries. Silk boxes—hold the stories told decades after their enslavement—give agency to “Comfort Women” and represent safe containers for personal memories.

“Repel the Invaders” is a collaborative project created by Eric Stykel, Michele Olsen and Lisa Fitzpatrick at the UMD Viz Lab in 2012, currently on display at the Great Lakes Aquarium. This interactive, projected application raises awareness of the problems of invasive species within Lake Superior and nearby ecosystems. It is coded with the open-source computer program, Processing. In the display, an animation of the bottom of Lake Superior is projected on the wall. There, native species swim around. When a child casts his or her shadow on the wall (i.e. human intervention), the native species are scared away and invasive species begin to take over. The child can try to trap the invasive species to help the native species come back. “Repel the Invaders” has been registered with the U of M Office for Technology Commercialization. More..

Video on Human Impact on Lake Superior and Diatoms

Created by Dustin Thompson, a Viz Lab Design Research Assistant, this video is on display for the Great Lakes Aquarium. It’s educational and provides outreach efforts for a Sea Grant project using diatoms from sediment cores to investigate historical water changes based on anthropogenic impacts.

The quest of modernity has come to its final phase in the form of postmodernism.  Many of the past victorious attempts to define “individualism” and “self” seem to have found the wall of linguistic structure and categorization as governing principals of human consciousness. Postmodernism tends to recycle the façade of preexisting methods and theories, thereby creating fragmentation and dislocation.  Simultaneously, the presence of computer technology is rapidly reshaping our visual culture by offering the potential for more streamlined production and distribution possibilities. More..