Thanks to the help of generous donors, the Department of English, Linguistics, and Writing Studies is able to offer a number of scholarships and prizes to recognize the achievements of our students. 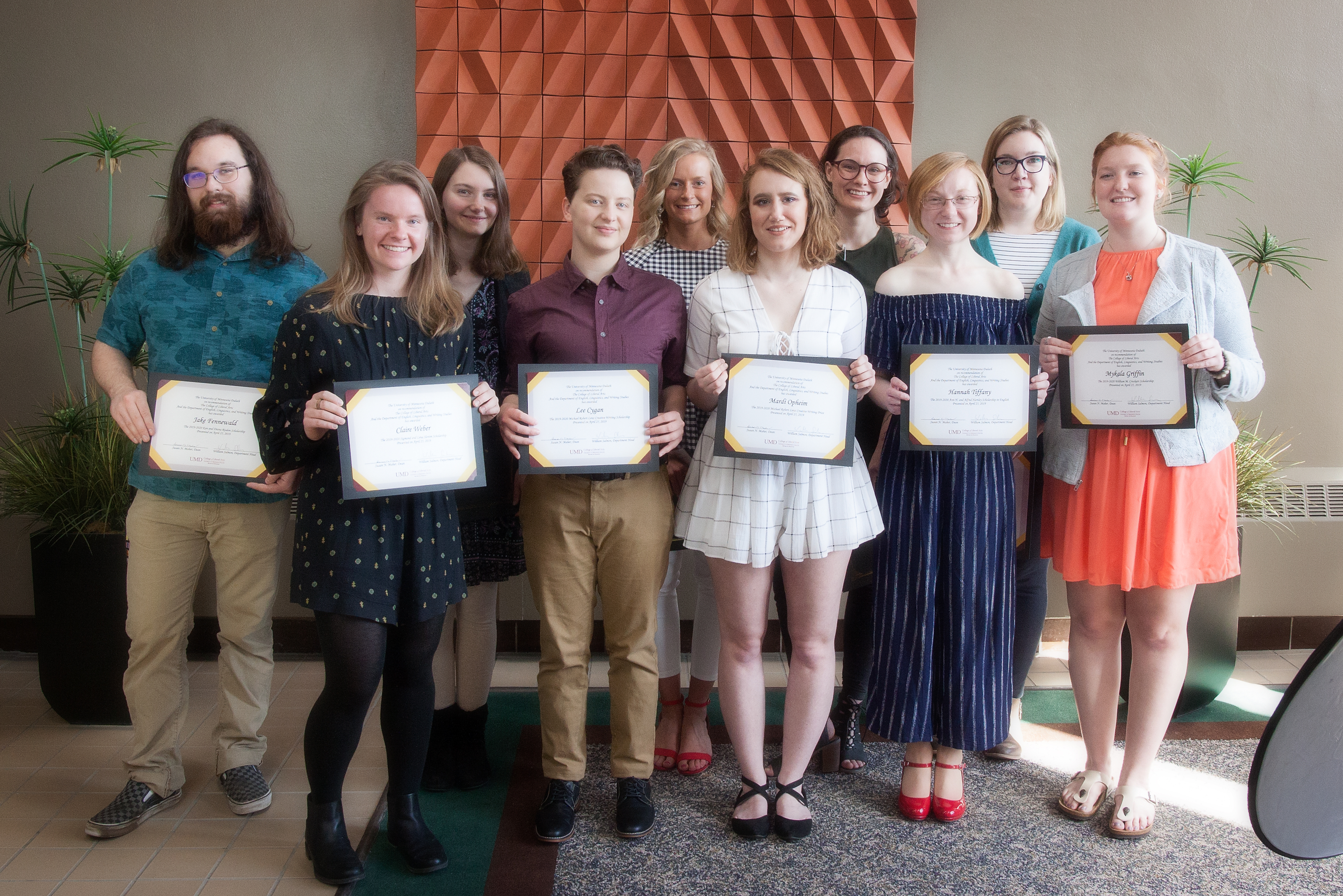 Each spring, the English Program Scholarship Committees solicits nominations from faculty and self-nominations from students. Winners are recognized at the annual CAHSS Awards Ceremony.

Below are descriptions of the scholarships offered by the English program. Students who are nominated for scholarships should submit:

Questions about the application process should be directed to your advisor or to the Scholarship Committee.

The Wendell P. Glick Memorial Scholarship: Barbara Glick created this scholarship in memory of her husband, Wendell P. Glick, who taught literature in the Department of English at UMD for 33 years. Professor Glick encouraged his students to be thinkers and questioners. This scholarship is intended to support students majoring in English, especially those who demonstrate a strong interested in 19th Century American Literature.

The Slonim Memorial Scholarship: The Slonim Memorial Scholarship is awarded to an outstanding English major who has declared an English major and will be beginning her/his senior year. The application should convince the committee of the student’s scholarly excellence and professional promise and evidence which demonstrates that her/his resources are inadequate to meet the costs of the senior year.

The Reed Scholarship: John Reed, English professor at Wayne State U and a UMD alumnus (class of 1959), created the John and Ruth Reed Scholarship for a student of English in honor of himself and his now deceased wife, Ruth, a graduate of Hope College. This scholarship is awarded to a full time English major or minor with a of 3.0 or higher.

The Ken and Diana Risdon Scholarship: This scholarship is awarded to undergraduate students majoring in Professional or Technical Writing Studies and/or Linguistics who demonstrate interest in technology and writing and/or linguistics. The original fund, established by Dr. Kenneth Risdon in memory of his late wife Diana, supports the growing need to teach the technology of writing.

Below are descriptions of the Writing Prizes and Scholarship, along with instructions specific to each contest. Applicants should specify the writing contest for which they are applying and include their name and contact information (including an email address).

The Mike Lenz Creative Writing Prize: Named in honor of former UMD English major Mike Lenz, this prize is awarded at the judges' discretion for the best original work of imaginative literature—narrative, dramatic, or lyric— in prose or poetry. Prose entries should be between 5-15 pages in length; a group of poems should be between 3 and 5 pages in length; plays should present an action that can be performed in 15 minutes or less. Entries should be typed and double-spaced. Only one entry per student is allowed. All full-time students at UMD with good academic standing are eligible to apply. The winner of the Mike Lenz Creative Writing Prize will receive an award of $100.

The Mike Lenz Creative Writing Scholarship: Named in honor of former UMD English major Mike Lenz, this scholarship is awarded to the student who submits an exemplary piece of imaginative literature—narrative, dramatic, or lyric—in prose or in verse. Prose entries should be between 5-15 pages in length; a group of poems should be between 3 and 5 pages in length; plays should present an action that can be performed in 15 minutes or less. In addition, applicants should include a statement about their degree completion plans and their anticipated financial need for the following school year. Entries should be typed and double-spaced. Only one entry per student is allowed. All full-time students at UMD with good academic standing are eligible to apply. The winner of the Mike Lenz Scholarship will receive an award of $500.

The Lawrence Wright Essay Prize: Named for a late professor in the UMD English Department, this prize is awarded for the best original critical or analytical essay written by a declared English or Communication Arts major in on a topic in linguistics, literature, or teaching methods. Wright entries should be 3,000-5,000 words (10-15 pages) in length, double-spaced. Manuscript form and documentation should follow a standard scholarly citation format—MLA, Chicago, or APA. Only one entry per student is permitted. The winner of the Lawrence Wright Essay prize will receive an award of $100.

The Jankofsky Essay Prize: Since 1999, the Klaus P. Jankofsky Fund for Medieval and Renaissance Studies has supported an annual lecture by a notable scholar of Medieval or Renaissance Studies and an essay competition, in which a $250 prize is awarded to the best student essay on any topic in Medieval and/or Renaissance Studies (roughly AD 350-1660, including History, Art History, English, Foreign Languages, Linguistics, etc.) by a UMD student. The Committee will select winners based on the strength and presentation of the argument, as well as originality of research, where appropriate. A prize of $250 will be awarded to the best essay, which will be published in a booklet also funded by our anonymous donor and dedicated to the memory of Professor Jankofsky and the student-scholars who carry on his intellectual legacy. Any UMD student may compete in the contest. The winner is announced at the Jankofsky Lecture in the spring.

PRIZES ARE AWARDED AT THE DISCRETION OF THE JUDGES.