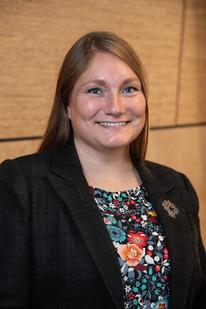 Dr. Rebecca Webster joined the American Indian Studies Department in the fall of 2016. She teaches primarily online courses for the Master of Tribal Administration and Governance (MTAG) program and for the undergraduate Tribal Administration and Governance (TAG) program. She is an enrolled member of the Oneida Nation in Wisconsin where she currently serves on the Oneida Land Commission, an elected tribal body responsible for setting land use and acquisition priorities for the Oneida Nation. Prior to joining the American Indian Studies team at UMD, Dr. Webster served the Oneida Nation as an attorney for 13 years where she provided legal advice for the Nation's administration on government relations, jurisdiction concerns, and a wide variety of tribal land issues. She received her B.A. (2000), M.P.A. (2003), and J.D. (2003) from the University of Wisconsin-Madison and her Ph.D. (2014) in Public Policy and Administration from Walden University.

Dr. Webster’s research interests focus on tribal and local intergovernmental relationships, best practices in tribal administration, and indigenous food sovereignty. In the spring of 2017, Dr. Webster and her husband purchased 10 acres of land on the Oneida Reservation. The following year, with the help of friends and family, they built a home. They currently grow traditional, heirloom foods with an emphasis on Haudenosaunee varieties of corn, beans, and squash. Their long term goal for this property is to serve as a place to host events where community comes to learn about planting, growing, harvesting, seed keeping, food preparation, food storage, as well as making traditional tools and crafts. The philosophy is that every seed an indigenous person plants is an act of resistance and an assertion of sovereignty. With these goals in mind, an Oneida faithkeeper named their property Ukwakhwa: Tsinu Niyukwayay^thoslu (Our food: Where we plant things).

When she is not pursuing her academic interests or spending time with her family, she enjoys making corn husk dolls, beading, and sewing. Her award winning artwork has appeared in the Oneida Nation Museum and on a traveling exhibit through the James Watrous Gallery in Madison and the Wisconsin Academy of Science Arts & Letters.