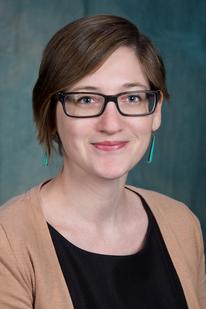 Professional Title
Associate Professor, English Graduate Faculty
Paula Derdiger completed her Ph.D. in English at McGill University before joining UMD in 2015. Her primary area of research and teaching is modern British literature, specifically the mid-twentieth century period and the significant impact of World War II on literary and cultural production. In October 2020, she published her first monograph, Reconstruction Fiction: Housing and Realist Literature in Postwar Britain, and she has published a number of articles and book chapters on British writers from the mid-century period with attention to modernism, wartime culture, and postwar realism. Film studies is her secondary area of expertise, and her next monograph will bring together literary and cinematic interests as they pertain to hybrid identities and multi-genre work in the transnational context of World War II. She is a board member of the professional society The Space Between: Literature and Culture, 1914-1945 and an active member of the Modernist Studies Association. At UMD she regularly teaches courses on twentieth-century British literature, contemporary global Anglophone literature, film analysis, and adaptation.

‘“Now you’re one of us’: Surveying Postwar Berlin in Billy Wilder’s A Foreign Affair.” International Intrigue: Plotting Espionage as Cultural Artifact, special issue of The Space Between: Literature and Culture, 1914-1945. Vol. 13. 2017. http://scalar.usc.edu/works/the-space-between-literature-and-culture-1914-1945/vol13_2017_derdiger.

‘“We Shall Never Make a Home of This’: Elizabeth Taylor’s Postwar Reconstruction Fiction.” Long Shadows: The Second World War in British Literature and Film, 1943 to the Present. Ed. Petra Rau. Evanston: Northwestern UP. 2016.

(With Phyllis Lassner), “Domestic Gothic, the Global Primitive, and Gender Relations in Elizabeth Bowen’s The Last September and The House in Paris.” Irish Modernism and the Global Primitive. Eds. Claire A. Culleton and Maria McGarrity. New York: Palgrave Macmillan, 2009. 195-214.