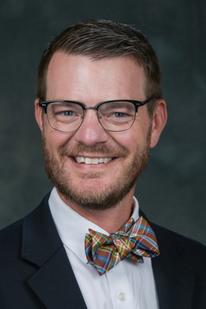 Jeremy Youde joined the College of Arts, Humanities, and Social Sciences as Dean in July 2019.

Before going to Australia, Youde was a member of the Department of Political Science at UMD from 2008 to 2016. He earned tenure at UMD in 2012 and served as department head for 3-1/2 years. He previously held appointments at Grinnell College and San Diego State University.

An internationally-recognized expert on global health politics, Youde is the author of five books, co-editor of three volumes, and the author of more than 40 peer-reviewed journal articles and book chapters. He has also written for outlets like World Politics Review and Duck of Minerva, and he has appeared in Slate, Vox, Nature, ABC Radio National, Science, Sky News, and Gizmodo. He is a member of the editorial board of Global Health Governance and is the current chair of the Global Health Section of the International Studies Association.

Youde earned his BA in political science and global development studies from Grinnell College and his MA and PhD in political science from the University of Iowa. Outside of his academic work, he is an avid (if not necessarily speedy) runner, has a fondness for bowties, and will stop to pet most dogs.