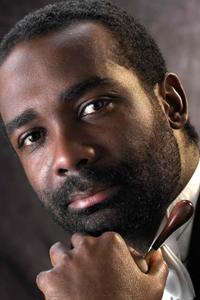 Performer, conductor and composer, Jean R Perrault is Director of Orchestras and Associate Professor of violin/viola at the University of Minnesota Duluth (UMD). Born in Port-au-Prince, Haiti, he earned his Master's degree in performance from Temple University. Rudy has conducted numerous ensembles including Sinfonietta de Paris, the Karelia State Conservatory Orchestra (Russia), the Conservatoire de Paris region Boulogne-Billancourt (Paris, France), members of the Vincenzo Bellini Conservatory of Palermo (Sicily, Italy) and the Hacettepe Conservatory Symphony Orchestra (Ankara, Turkey). His most recent trip took him to Venezuela where he worked closely with members of "El Sistema" organization conducting master classes and workshops. He is a frequent panelist on national and international, instrumental and conducting competitions, and has participated in many prestigious music festivals.

Rudy maintains an active schedule and has performed with many different organizations. He is a founding member and president of the Kako Foundation, a non-profit organization dedicated to bringing classical music to underprivileged youth in the US and Haiti.

The past several years he has been editing and orchestrating the piano works of Haitian Classical Composers. His most recent compositions include: "Brother Malcolm" – for cello and piano, "Exodus" for String Quartet. Future projects include setting to music three poems of world-renown author Edwidge Danticat, composing a duo for violin and cello (Dialogues for Violin and Cello), a second String Quartet and a ballet (Ceremonie Vodou). Rudy makes his home in Duluth, Minnesota, with his wife Elizabeth and his two children Ella and Alexandre.Jean R Perrault's website