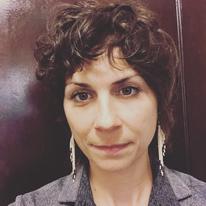 I received my doctorate in Visual Studies with a designated emphasis in Feminist Studies at the University of California - Santa Cruz in June 2017 and have been teaching Art History in the Department of Art and Design at UMD since Fall 2017. I also currently serve as the Midwest Exhibitions Field Editor for caa.reviews.

To date, the bulk of my research has concerned the experimental art, film, and visual culture of the German Democratic Republic during the 1980s. Broader interests include official cultural policy in state socialism, the art and visual culture of the Cold War East and West, fiction and documentary film from the Eastern Bloc, as well as global histories of modernism and post-modernism in the visual arts, in Germany, Central and Eastern Europe, and the United States. My interpretive frameworks engage theories of aesthetics and politics, vision and visuality, and feminism.

My research has appeared in a number of academic and arts forums, both in English and in translation, including in Third Text, The Oxford Handbook of Communist Visual Cultures, Cinema Journal, Gradhiva, post: Notes on Modern & Contemporary Art Around the Globe (Museum of Modern Art), ARTMargins Online, and the exhibition catalogue Gegenstimmen. Kunst in der DDR 1976 – 1989 (Voices of Dissent: Art in the GDR 1976 – 1989). My book Parallel Public: Experimental Art in Late East Germany will appear with the MIT Press in February 2022.