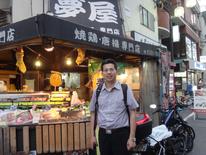 Qiang Fang got his Ph.D in Modern Chinese history and 20th Century US history from the State University of New York at Buffalo in 2006. His research focuses on Chinese legal and political history. He has authored and edited several books and numerous articles in both English and Chinese. At UMD, Qiang Fang mainly teaches courses on law, politics, and culture of modern East Asia, Sino-US Diplomatic history, and a survey course of Modern World History.