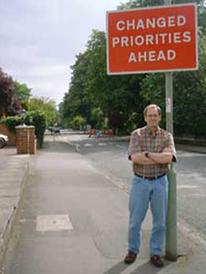 Craig Stroupe teaches and writes about information design as an associate professor. He is also currently serving as Director of Graduate Studies for the English MA Program. He came to UMD in 2001 from San José, California where, for two years, he was the Associate Director of San José State University's Online Campus. From 1992 to 1999, he taught American at Kansas State University, where he also served as Director of Computers, Literature and Rhetoric.

He earned a Ph.D. in American literature from Florida State University in 1994, where he also received an MA in creative writing and edited the literary magazine Sundog: The Southeast Review.

He has American literature, fiction writing, and digital composition, as well as a variety of writing courses.

He has published in the journals College English, Computers and Composition, Pedagogy, and several book collections.