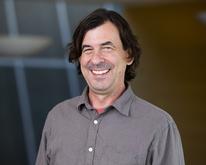 As a scholar, I am no longer very scholarly. As you might guess from my focus on American Indian literature and film, I enjoy the creative process and participating in it, whether by reading books, viewing films, or producing my own creative work. By reflecting on and engaging with the values and spirits embedded in Anishinaabe teachings, my fiction and creative nonfiction explores what it means to be an Anishinaabe descendant.

In both my teaching and writing, I wonder what the world would look like if the ethical and ecological values found in the knowledges of Indigenous peoples were moved to the center of our discussions of what we want our society to become. My novel, Stories for a Lost Child, explores these themes and ideas through a coming-of-age story about a teenaged girl seeking to understand what it means to be Anishinaabe. I am currently working on a book of creative nonfiction called Strange Spirits: A Memoir in Monsters that examines Native stories about cannibal spirits and the forest beings (Sasquatch!) while narrating the historical and personal fractures that resulted in my family losing touch with its Anishinaabe roots.

“The Possibilities (and Problems) of Indigenizing Sf,” Expanded Horizons, no. 5. February 2009.

“American Indians at the Final Frontiers of Imperial Sf,” Expanded Horizons, no. 1. October 2008.