UMD Theatre selected for the 14th time to KCACTF Regionals! 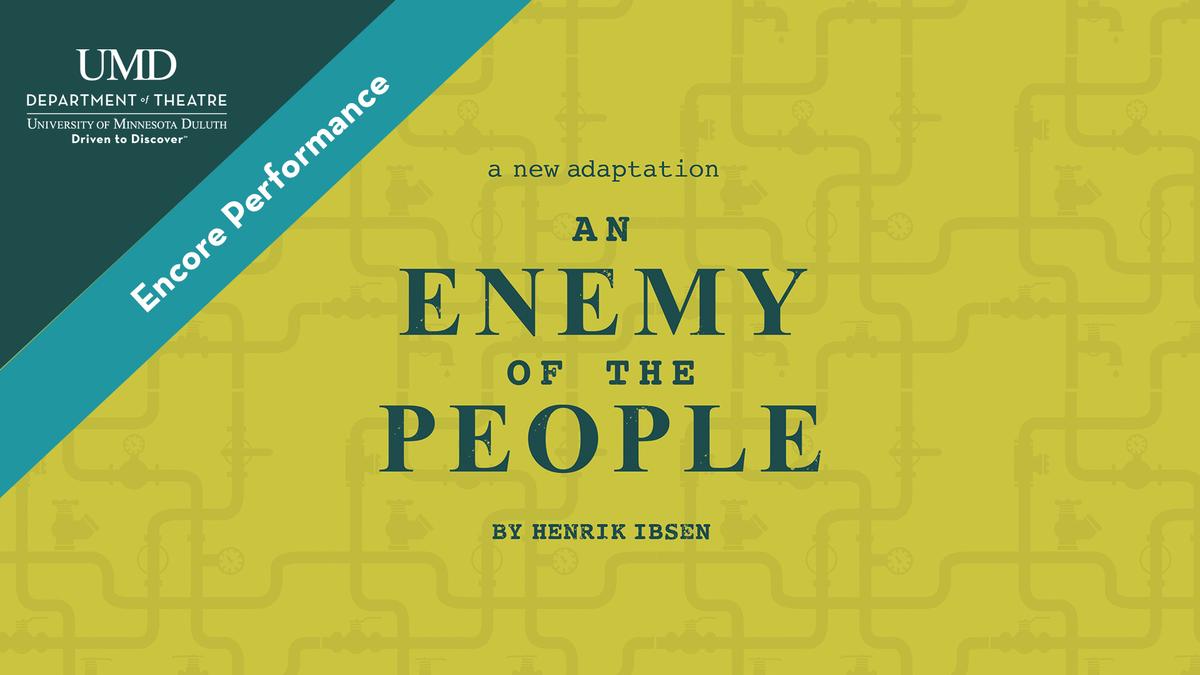 "An Enemy of the People" chosen among the seven-state region.

UMD Theatre’s "An Enemy of the People" selected to perform at KCACTF regionals. If you missed November’s sold-out shows, here’s one more chance!

UMD Theatre presents
Encore performance of "An Enemy of the People"
By Henrik Ibsen
A new adaptation by Tom Isbell | Directed by Tom Isbell
When a scientist discovers the town’s water is toxic, the community must choose between jobs or environmental safety. A play as relevant today as when it was written in 1882.

UMD Theatre is proud to be chosen to bring their production of "An Enemy of the People" to the John F. Kennedy Center for the Performing Arts' Kennedy Center American College Theatre Festival (KCACTF) regionals next month! Due to the sold-out November shows, and to defray travel costs to the festival, UMD Theatre is presenting one performance at UMD on January 17.

The Region 5 KCACTF Festival 52 in Sioux Falls, South Dakota is in January. UMD Theatre presents An Enemy of the People, which is one of only seven productions selected to perform in the seven-state KCACTF regionals next month.

The seven-state KCACTF Region 5 consists of Iowa, Kansas, Minnesota, Missouri, Nebraska, North Dakota & South Dakota. In November 2019, when this show was presented as part of the 2019-2020 UMD Theatre season, a KCACTF "production respondent" representative attended our production along with all other University & College Theatre entries. Attached is UMD Theatre's KCACTF historical statistics.

This production was entered in the John F. Kennedy Center for the Performing Arts' Kennedy Center American College Theater Festival (KCACTF). The aim of this national theater education program is to identify and promote quality in college-level theater production. Each theatrical production entered is eligible for a response by a regional KCACTF representative and eligible for invitation to the KCACTF regional festival and may also be considered for national awards recognizing outstanding achievement in production, design, direction and performance.  Last year more than 1,500 productions were entered in the KCACTF involving more than 200,000 students nationwide. By entering this production, UMD Department of Theatre is sharing in the KCACTF goals to recognize, reward, and celebrate the exemplary work produced in college and university theaters across the nation. (www.kcactf5.org)

Original promo of An Enemy of the People (Oct/Nov 2019): https://z.umn.edu/EnemyPeopleTHVideo