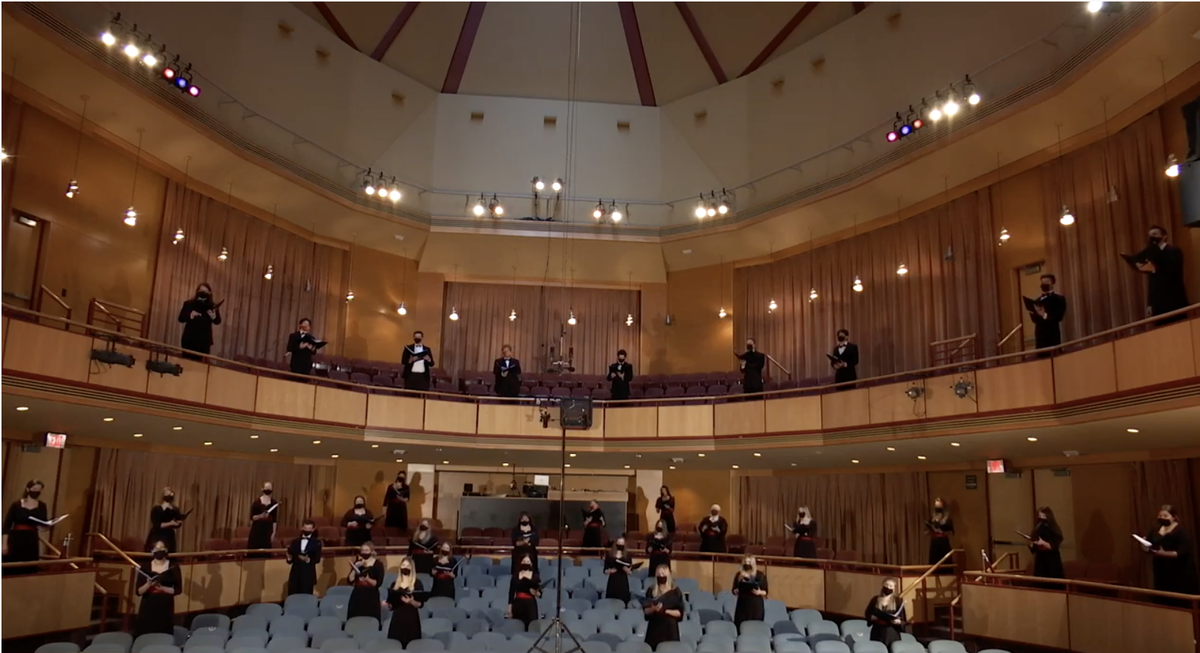 Our music students brought their creativity to the forefront.

Singers at the University of Minnesota Duluth overcame great odds this semester, wearing masks, rehearsing online, practicing outdoors and in large lecture halls, in small groups, in shortened rehearsals, and using the latest technology and recording techniques, all in an effort to continue to share their musical gifts with the community. After spending the spring semester wondering what the future would hold for choral music in the age of COVID-19, social distancing, and campus and state safety protocols, Richard Robbins and Ryan Deignan, UMD choir directors, put their heads together and began planning for the fall. "It was pretty wild," says Richard Robbins, director of choral activities at UMD. "Scheduling music for small groups and rehearsing for such short amounts of time presented a lot of challenges. But the students really pulled through and were amazing this semester. It's the most focused group of singers I've worked with, maybe ever." Allowing for safety protocols and multiple air exchanges meant that students had to be creative. Ryan Deignan, director of choirs and vocal jazz, adds: "The pandemic has forced each student to rely much more on their own vocal and musical skill than in a normal semester. They've developed strength through adversity."

There were unique benefits to rehearsing under these circumstances. Choir students had the opportunity to record in nature and enjoy the outdoor beauty of Duluth in ways they had not in past years. And recording on video meant that they had the opportunity to visit different locations, including Duluth's historic Cathedral. The performances were also more eclectic.  Choral and vocal jazz ensembles, which are usually featured in separate concerts, combined their efforts, allowing family and friends to enjoy music they might not usually hear. Music also served an important role in helping students relieve anxiety this semester. "Students have told me how important choir has been to their mental health during this time of isolation and how grateful they are for the meaningful musical moments we have shared despite the challenge," says Deignan.

The virtual concert on November 13 (Video sampling) was shown to family and friends online, and an audience of over 150 joined together on Zoom to share positive comments and enthusiastic responses with members of the choir. The concert featured everything from "virtual choir"- style recordings featuring singers independently recorded in isolated locations to socially distanced recorded performances. "Students knew that they had one take for most of these performances, and their discipline was amazing," said Robbins. "They learned so much of this music on their own, to maximize time. We had a schedule of recordings that started in October, and we would do one piece here and one piece there, checking them off the list as we went along."

Robbins and Deignan are sure the future is bright for the choirs, no matter what the challenges of continued safety precautions. "People have been singing for millenia, and where there's a will, there's a way," says Robbins. Deignan agrees: "I think the trials of the pandemic have brought each ensemble closer together in ways that will continue to strengthen each group in the future."