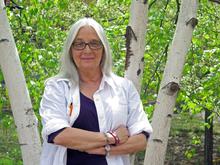 Jefferson Campbell, associate dean of the College of Liberal Arts and music professor, received a University of Minnesota Imagine Grant to commission a new composition for bassoon in a chamber music setting.

As events unfolded, he found himself working with two talented and creative women on, as he says, “an amazing” composition entitled, “Sea Smoke.”

Campbell’s choice of internationally known Jenny Brandon for the composer and Linda LeGarde Grover (American Indian Studies) as the lyricist turned the piece into “deeply personal… and deeply spiritual” music.

Campbell was only “focusing on the weather phenomenon” when he thought of a musical composition that expressed sea smoke. He had seen photos and experienced it in person. When he tried to describe Duluth to people who had never been to the city, he showed them pictures of sea smoke. He thought it “could be an interesting image to try to describe musically.”

The more he considered the project the more he wanted to know. “I wondered if there was any historical writing about it,” and he looked for “an indigenous peoples connection” he says. He came across someone, Linda LeGarde Grover, on the UMD campus, “just two buildings over from me.”

At the very first meeting between Campbell and Grover, the work took shape. Grover says, “I was born in Duluth and so the lake has been present all my life. I'm conscious of the changing of seasons, because that's a basic Ojibwe way of looking at the weather, but also at our existence as human beings.”

Sea smoke, also called sea fog, is an unusual and rare occurrence. It takes form as barely visible hovering mist to towering walls of rising clouds. Sea smoke is formed when cold air hits the warmer water of Lake Superior, creating a layer of water that cools rapidly and condenses and forms vapor.

In that first meeting, Grover says she pictured the lake, the rocks, and the trees in the sky. “They are massive and very strong presence here.” She says that images appeared to her as she and Campbell talked. “The beings who exist in and around [the lake] have a story also, and so it was not much of a surprise to me… that I thought about the very old story about the woman who had encountered one of the lake spirits.” That woman is part of Grover’s “Sea Smoke” narrative.

The result of the collaboration will be a completed commissioned work "Sea Smoke on Gichigami" for soprano voice, bassoon, and marimba. The music will be composed by Jenni Brandon and the text by Linda LeGarde Grover.

Campbell says it has been an “extraordinary and fulfilling experience.” However, the project has had its difficulties. Working “across the country during a pandemic has been challenging,” he says, “but it gave us something positive to work on during the trying time.”

The pandemic is still causing logistical issues, and Campbell hasn’t set a firm date for the release. However, he is making a promise. “This piece will be premiered later in 2021,” he says.