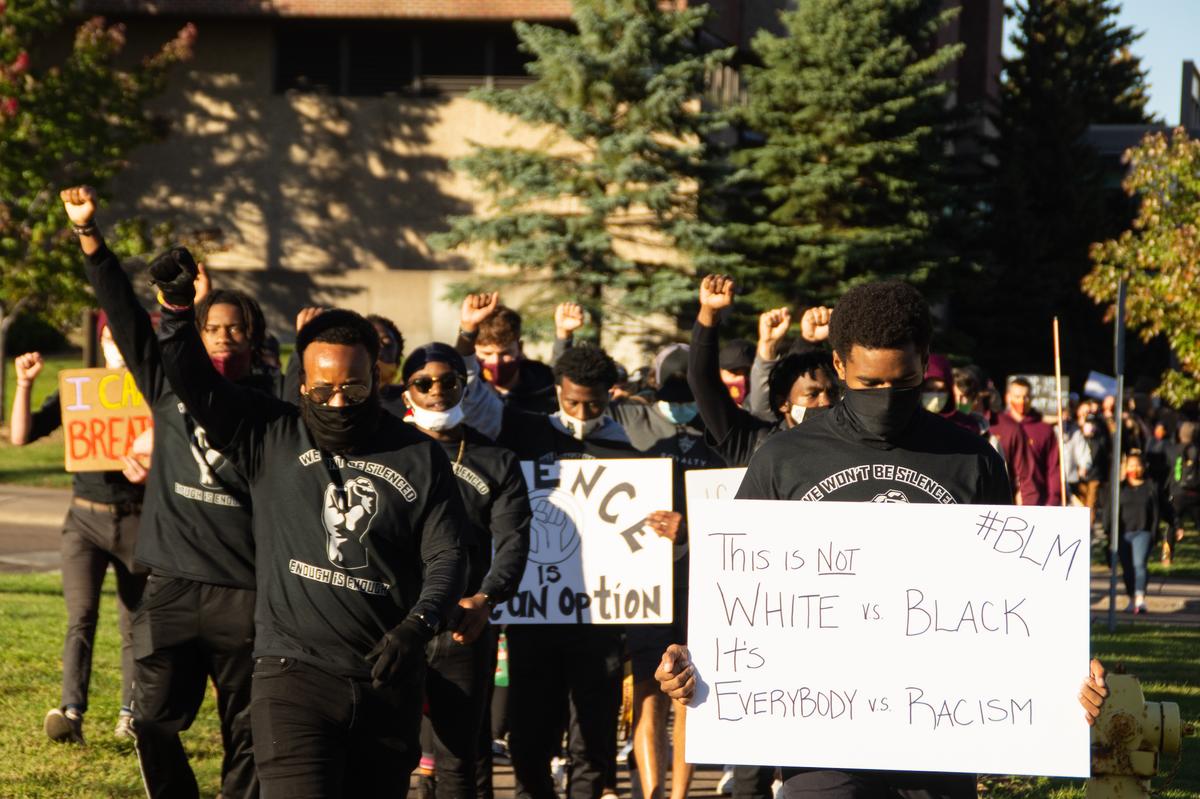 Nineteen days apart, two groups at UMD each made a statement with a similar theme. On August 28, 2020, the Anti-Racist Subcommittee (ARC)—a subcommittee of the Employees of Color and American Indian Mentoring Group (EOCAI)—delivered a statement to the UMD administration requesting three transformative initiatives aimed at addressing racism and inequity at UMD. On September 16, 2020, 19 days later, a student group, Black Men Serving Excellence (BMSE), welcomed the entire campus to a peaceful protest against racial injustice.

The initiatives addressed in the ARC memo include the hiring of a Vice Chancellor of Equity and Diversity at UMD; the cluster hiring of 50 faculty members who are Black or African American, American Indian or Alaska Native, or Hispanic or Latino over a three year period, and a 3-credit academic course on social and racial justice to be required of every UMD undergraduate student within the first three semesters of their schooling.

ARC came together to write the memo in the summer of 2020 in response to the murder of George Floyd in Minneapolis in May. Their research is thoughtful and data driven. It shows that in 2019, Black/African American, American Indian/Alaska Native, and Hispanic/Latino faculty accounted for only five percent of UMD’s faculty. That’s very low when compared to the population of the state of Minnesota and lower yet, when compared to the United States.

The world is changing and the future financial health of the university requires UMD to recruit and retain a diverse student population. Yet, in fall 2019, UMD graduated only 103 students belonging to non-white groups—a mere 4.5% of the 2,256 graduating student population.

The BMSE group emphasized peace. “The march…is meant to show solidarity with everyone at UMD, faculty, staff, students, and the community,” said Javien Versey, a psychology major and member of the football team. Defensive Backs Football Coach Marcus McLin, the group’s advisor, agreed. “This is a peaceful protest against injustice. It’s not anti-white, and it’s not anti-police.” One student’s sign said it clearly, “This is not white vs. black. It’s everybody against racism.”

The march was indeed peaceful. Over 200 students, faculty, staff, and community members joined with chants and signs.

The COVID-19 pandemic and the Black Lives Matter movement will have an impact on UMD. Administrators are seriously looking at the ARC proposal. UMD faculty and staff, especially within the student life programs, have made a commitment to make UMD a safe place for everyone.

“The response by so many different constituencies on campus is crucial. Change will only come if multiple people raise their voices and demand it,” said Jeanine Weekes Schroer, member of ARC and associate professor of philosophy at UMD.

The bottom line is that the university must do something.

“We need to take action in order to make sure that UMD lives up to its commitment to be a place where our students, staff, and faculty of all backgrounds can thrive," CLA Dean Jeremy Youde says.