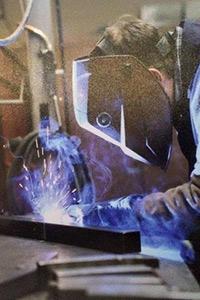 Sean Dumm is enjoying his second season as Departmental Assistant Tech. Director here at UMD. Some of his favorite works so far include last seasons Buried Child and A Doll’s House earlier this year. Sean trained as an undergrad at Ball State University and completed his MFA in Technical Direction at Indiana University. He has worked at theatres across the east coast and mid-west Including Triad Stage in Greensboro, NC and Long Wharf Theatre in New Haven, CT. Recently in addition to his work on campus Sean was Tech. Director on Lyric Opera of the North’s production of Carmen. Sean is also an amateur mask maker specializing in leather theatrical masks. His work is on display in the lobby of MPAC.