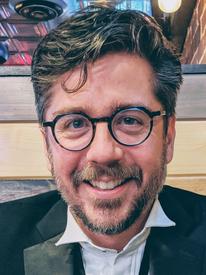 Richard Robbins is the director of choral activities at the University of Minnesota Duluth, where directs the University Singers, Chamber Singers, and teaches an array of choral conducting and music courses. Prior to this, he served as director of choral activities at the University of Wisconsin-Superior, where he directed the A Cappella and Chamber Choirs, and taught courses in choral music education, counterpoint, ear training, and music technology. Robbins travels extensively as a clinician, adjudicator, and director for choral festivals and honor choirs across the country, with recent engagements in Miami, Los Angeles, Orlando, San Francisco, Chicago, and New York City. His editions of Italian sacred music of the early Baroque are published internationally, and he has been invited to present on a range of topics for music education and conducting organizations, including the American Choral Directors Association and the International Federation of Choral Musicians, and has conducted and lectured internationally at Warsaw’s Chopin Conservatory of Music, the John Paul II Liturgical Institute, and at Krakow’s Academy of Music. As a conductor, his performances have been featured on nationally-syndicated programs, including American Public Media’s Pipedreams.

Choral groups under Robbins’ direction have earned awards at numerous festivals, and have collaborated with a wide range of classical and pop artists. He taught choral music in the Texas public schools for several years (most recently at Houston’s famed High School for the Performing and Visual Arts, where he was named teacher of the year), and previously directed the Concert Women’s and University Men’s Choruses at the University of Houston. He is a member of ACDA (serving on the executive board of Minnesota ACDA and the Southwestern Division), Chorus America, NCCO, and NafME. He continues his work with youth choirs as a festival conductor for the American Federation Pueri Cantores, the Vatican’s student choral organization. Robbins holds degrees in music education from Florida State University (BME) and degrees in conducting from the University of Houston (MM, DMA).