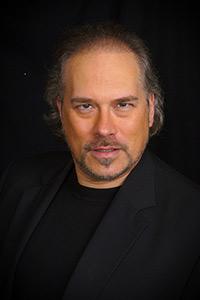 One of the leading heldentenors of his generation, John Charles Pierce has sung in opera houses and concert halls around the world. His interpretation of the role of Tristan in Wagner's Tristan and Isolde, a pinnacle of the tenor repertoire, has been the pillar of his career. Pierce graduated from the University of Illinois with a BM and MM in Vocal Performance. Further studies followed at Indiana University. He was an Apprentice with Santa Fe Opera and a Metropolitan Opera Regional Finalist as a baritone. After making the switch to dramatic tenor, he won the Wagner Prize at the Liederkranz Competition in New York City, then moved with his family to Germany, where he sang full-time at the Brandenburg State Opera House in Cottbus for ten years. There he sang much of the important repertoire for his voice type, including Wagner's Lohengrin, Tannhaueser, Rheingold and Flying Dutchman, Verdi's Otello, Hoffmann, Freischütz, Fidelio, Jenufa, Katia Kabanova, Pique Dame, Samson and Dalilah and many others. He has sung these and other roles in countless theaters in Germany. Pierce has shown surprising flexibility, singing music in all styles. As a baroque singer, his ornamentation and trills have been lauded. At the other end of the spectrum, he sang dozens of performances of Tony in West Side Story to acclam. His collaboration with John Wustman has yielded wonderful performances of Schubert's Winterreise, both at home and abroad. Verdi's, Dvorak's and Mozart's Requiems, Beethoven's 9th Symphony, Elijah and Messiah count among the many concert works he has performed.

His Tristan debut was in 2000 in Dortmund. Since then, he has sung that role in Prague, Poland, Rio de Janeiro, Innsbruck, Rotterdam, Victoria- Canada and in many cities in Germany. In 2010 he was featured as Tristan in Japan, as well as in the Wagner Festival in Wels, Austria. In 2011 he debuted as Parsifal at the Croatian National Theater in Zagreb, followed by a concert Parsifal in Germany, then sang Tristan in Brazil and Argentina.

Pierce was previously a member of the voice faculty at the University of Michigan where he was president of the Michigan Chapter of NATS.