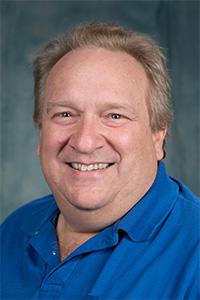 A student of both choral and instrumental music, Don started performing professionally at the age of 16. Working with a talent agent, he played original and rock music from 1971 to 1975. His focus then shifted to folk music which culminated with a performance of an original composition at the inaugural ball of Wisconsin Governor Tony Earl in 1980.

A retail music venture, Great Northern Music Centers Inc. was the next thing to be added to his repertoire which he helped build to a three store operation in Ashland and Superior Wisconsin and Duluth Minnesota. This included a sound company, music school and recording studio. Further development of this venture yielded a sound system installation business which featured acoustical consulting, sound system design and sound system operator training.

In 2002, upon completion of the Weber Music Hall, he was asked to apply for the position of Facility Manager and Technical Director. This is the position he holds to this date. He has stayed active as a Sound Engineer, which over the years has included work for: Doc Severinson, Pam Tillis, Marvin Hamlisch, B. J. Thomas, Robin Eubanks, Joey DeFrancesco, SCTV, Vice President Walter Mondale and Governor Rudy Perpich.